In 2015, five small-farm owners in Canada were given a John Deere tractor to use for 10 weeks. Each of them was loaned a John Deere 3E Compact Utility Tractor or a 5E Utility Tractor. In exchange, we asked them to film what life was like on their farm for just a few minutes each. Some had never owned a tractor. Others usually borrowed a tractor from a neighbor to use when needed. And some of them already had a few pieces of their own equipment. These Get Down To Dirt videos are their stories about their experiences with using the tractor. These stories also appeared in the John Deere Journal.

Dwayne and Tonia didn’t always intend to be farmers. Each of grew up on a farm, but while living in the city, they realized how much they missed the space and lifestyle afforded by living in the country.

“We felt like a part of us was missing,” Tonia said. For more than a century, Lorhill Farm had been in Tonia’s family. In 2012, Tonia and Dwayne began working to create the farm’s next chapter. In the heartland of Ontario farmland sells for upwards of $20,000 per acre. The couple could have easily sold the family farm and walked away with the proceeds. But Tonia wanted to preserve the way of life she grew up with, so they decided to purchase the farm.

With some of the land rented, they have ventured into greenhouse vegetable production. Dwayne is an electrician and Tonia is an event planner, and they have found it difficult to find enough time to fit their farm work around their off-farm jobs. 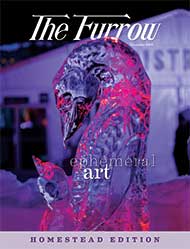